Whether you shave, wax or zap it, grooming body hair can require a ton of time and effort. Even if you’ve been doing it for years, these under-the-radar expert facts can make the pursuit easier.

Shaving Takes Months
According to Fort Lauderdale, FL dermatologist Dr. Matthew Elias, the average woman spends about 11 minutes a day, at least three days a week, just shaving: “That equates to more than two hours a month and one whole day a year,” he says. “When you add it up, it’s the equivalent of almost two entire months of your lifetime spent on shaving!”

No pain, No Gain
WAXWITCH’s Stacy Rus is adamant that there is no such thing as a painless wax. “It doesn’t matter what the ad says, ultimately, you’re having hair ripped out,” says the waxing expert. “There is no special type of wax that exists that will make it painless, but the mild discomfort should subside fast, and it does get easier to tolerate with each and every visit.”

Out of the Shadows
“Shaving is an aggressive form of exfoliation, which makes it easier for dirt, bacteria and deodorant residue to build up in the underarm hair follicles,” explains Rus. “It can also cause ingrown hairs, which darken the area over time, creating a shadowy look. Waxing gets rid of hair at the root, stops the over-exfoliation and eliminates the dark shadow, which gives the underarms a much smoother, lighter look.”

After-Care Is Key
Having an adverse reaction doesn’t always mean your waxer made a mistake or that you’re allergic to the wax; user-error might play a part. Not following after-care instructions is the most common cause of an unfavorable outcome. It could also be due to diet, a medication or a simple histamine reaction.

Retinol On, Wax Off
“Threading is a much better option than waxing if you are using a topical retinoid on your skin,” says Bay Harbor Islands, FL dermatologist Melissa Lazarus, MD. “Wax can pull at delicate skin and leave it red and irritated, or worse, with raw areas where some skin is pulled off along with hair.”

Glowing Skin Is Not Always In
“Never get a laser hair removal treatment when you’ve recently tanned,” advises Covington, LA dermatologist Christel Malinski, MD. “Even self-tanner can be seen as pigment by the laser and cause an unintended burn.”

The Bumps Stop Here
Davie, FL dermatologist Lesley Clark-Loeser, MD, says laser hair removal is also a great option for those who tend to get razor burn or bumps: “The laser targets the brown pigment in the hair follicle beneath the skin and stops the cycle of ingrown hairs that often occurs when waxing or shaving areas with thick or curly hair.”

Lasers Aren’t One and Done
“All hair is not in the same growing stage,” Tenafly, NJ dermatologist Ana Cristina Laureano, MD says. “Only a percentage of follicles being lasered will be affected, so they must be retreated once they complete the cycle and return to the growing stage.”

Accepting All Shades
If you do have lighter hair, New York dermatologist Susan Bard, MD says fear not. “Because the laser is unable to effectively target hair with little-to- no melanin in it, like white, blond, gray or red hair, try electrolysis instead—it uses short-wave radio frequencies to disrupt hair growth—and is the best option for light hair.”

The mess-free No Mo No Mo-Bush ($12) wax strips in this DIY, travel-friendly kit heat up when you rub them in between your hands.

Glee Body Hair Removal Cream ($9) smells like honeydew melon and totally gets rid of hair in seven minutes or less.

The post 10 Things Derms Want You to Know About Getting Rid of Body Hair appeared first on NewBeauty. 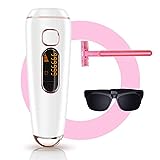